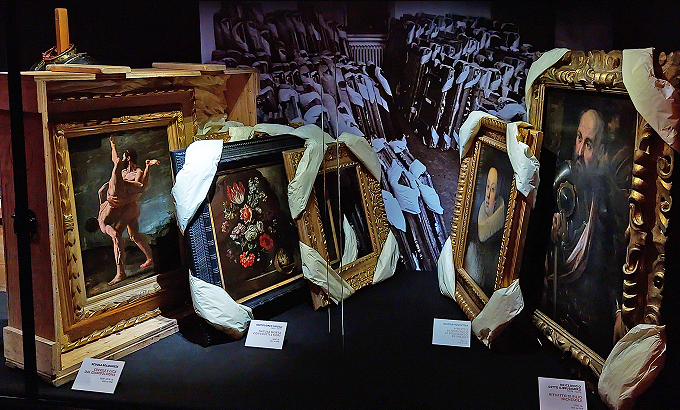 Mystery at the Stibbert: stories of theft and recovery

The Mystery at the Stibbert exhibition is a reflection on the work of art and its universally recognised symbolic value, analysed here with an emphasis on the thefts linked to the world of art and the recovery of works over time.

From the Napoleonic plundering, symbol of the conquest of a people, to the Nazi depredations, which took numerous works of art from the Florentine museums that were later recovered thanks to the investigative activities of the so-called Monuments Men,such as Rodolfo Siviero, to more recent art thefts, such as the theft of eight hundred pieces from the Stibbert Museum in 1977, part of which was promptly retrieved a few months later.

Equally useful to the recovery of the Stibbert Museum's heritage is the incessant investigative work of the Carabinieri Department for the Protection of Cultural Heritage, which aims to bring the stolen works out of obscurity and at the same time create a collective awareness of the protection and safeguarding of cultural assets as fundamental values of national identity.

Mystery at the Stibbert: stories of theft and recovery

As well as retracing the history of the Stibbert Museum after the death of its founder, the exhibition focuses on the thefts and plundering of works of art that this and other Florentine museums suffered under Napoleonic and Nazi tyranny, or for other reasons, while juxtaposing it with the investigative activities that contributed to their recovery and return, now carried out by a special investigative unit of the Carabinieri Command for the Protection of Cultural Heritage.