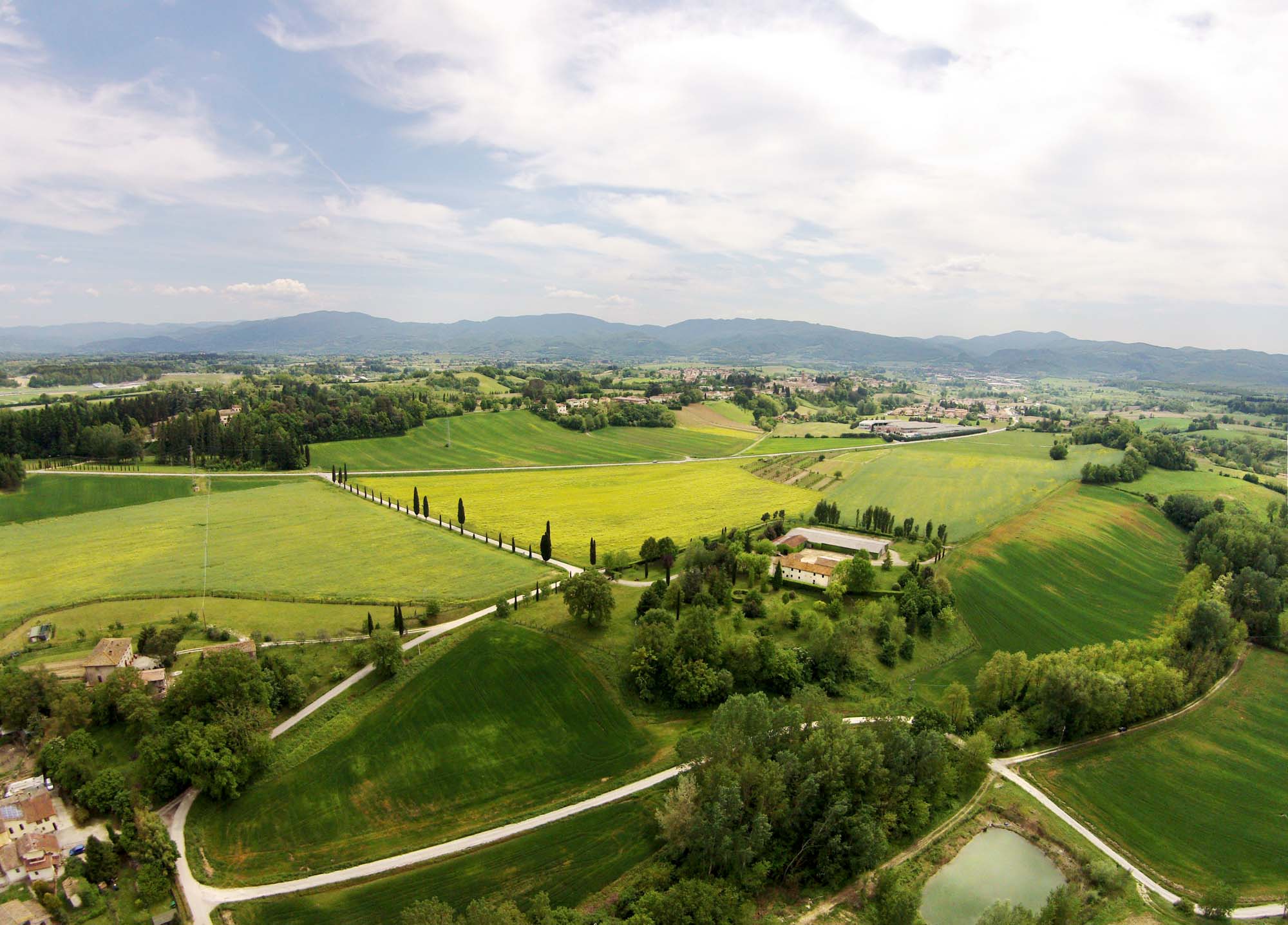 All around Florence - the Mugello area

The Mugello tourist area is a land a few kilometres away from Florence, a green paradise where each spot bears witness to a long and fascinating history, where unspoiled nature meets the art born out of the skill of a hardworking and welcoming community.

A land of artists, many illustrious Tuscans were born or lived here: Giotto, Beato Angelico, Andrea del Castagno, Galileo Chini, Dino Campana, Giuliano Vangi, and in this territory lay the origins of the Medici family, whose evidence is still quite visible in the area (Cafaggiolo Villa, Trebbio Castle, the Bosco ai Frati Convent).

The Mugello cuisine is rich in traditional dishes such as the ever-present tortello (potato filled ravioli) and boasts a series of typical quality products such as chestnuts, meat, cheese, wine and many others.

Travellers can leave the city's stress behind and take advantage of the hospitality offered in the cool farmhouses that have been tastefully restored, in the once abandoned hamlets that have been brought back to life, in the villas and palaces where noble Florentine families lived. They can explore on foot, by bike, on horseback the remains of roads that used to be untouched by traffic or engage in golfing, canoeing, gliding, sport fishing, rafting and many other activities with which to fully enjoy their free time.

Here are the 9 municipalities that make up the Mugello area:

Barberino di Mugello
The gateway to the Mugello area, located on the main A1 highway, Barberino di Mugello is home to the big Bilancino Lake, created as a dam to hinder the overflow of the Arno river, today very popular as a place to relax or practice sports such as canoeing or windsurfing. In recent years it has also become a shopping destination thanks to the Outlet Village of the McArthurGlen group. Birthplace of the great contemporary artist Giuliano Vangi, it is interesting to know that Palazzo Pretorio houses a permanent collection of the artist.

Borgo San Lorenzo
The hub of the Mugello area due to its central position compared to the rest of the territory, it features a liberty style itinerary on the subject of Chini , the Tuscan family of artists and decorators; chief among them being Galileo, founder of the San Lorenzo Kilns, one of the main manufacturers of ceramics and Liberty glass windows in Italy that was mostly functioning in the first half of the 20th century. It was the birthplace of Monsignor della Casa. It is lovely to stroll around the old town, buzzing at all times with bars and shops. The countryside of the hamlet is scattered with ancient parish churches, farmland, and a cycling route, beloved and frequented by sportsmen, that runs along the Sieve river.

Dicomano
There where the Comano stream flows into the Sieve river, at the foot of the main passes towards Romagna, lies Dicomano, a long-time transit place and commercial hub. A town of Etruscan origin, traces of which are visible in the Frascole archaeological area, the latter can be visited by appointment from May to October, during summer nights it turns into a picturesque location for events. Surely worth a visit are also the Archaeological Museum, the Santa Maria parish church and the Sant’Onofrio oratory. A cycle and walking path along the Sieve river connects Dicomano with the district of Contea.

Firenzuola
Middle ground on the Gothic Line, between castles and flavours of the Mugello tradition. Firenzuola, in the upper Mugello, was born at the behest of the Florentine Republic as a “New Land“. Located in the high valley of the Santerno river, it features breathtaking landscapes ranging from the pietra serena caves, so beloved by Brunelleschi, to the blue waters of the Rovigo river. There are two unmissable festivals: the prugnolo mushroom one in May and the Firenzuola potato one in August. Taking place every year in the wide Giogo-Casaglia territory is the UltraTrail Mugello on a route made of single tracks, mule tracks and forest paths.

Marradi
A small border hamlet in the Tuscan Romagna, surrounded by lush vegetation, famous for being the birth place of the poet Dino Campana, also famous for its chestnuts, celebrated every year in the autumn during the well-known chestnut fair. Even the Strada del Marron Buono is dedicated to chestnuts. The core of the old town is the charming Le Scalelle square, that overlooks the Palazzo Comunale, the Palazzo Fabroni and the Chiesa del Suffragio. Worth a visit is the 18th century Teatro degli Animosi theatre and the Chiesa di San Lorenzo, which houses some remarkable 5th century paintings by the Maestro di Marradi.

Palazzuolo sul Senio
Another historic hamlet in the heart of the Apennines is Palazzuolo sul Senio, included in the list of the most beautiful hamlets in Italy and described by the Airone magazine as "an ideal village for its beauty, the tranquility and the stillness surrounding it". Middle Ages left their strong mark on this area, so much that the "Medieval Celebrations. At the Court of the Ubaldini", celebrated every year in July, have become unmissable occasions to relive the past. Here chestnuts and the raviggiolo cheese reign supreme in the local cuisine.

San Godenzo
A gateway to the Foreste Casentinesi national park, where nature is king, giving us landscapes that have been loved and praised by poets and painters, such as the famous Acquacheta cascade, also called Dante's Waterfall. Standing in the middle of the village is the wonderful San Gaudenzio Benedictine abbey, one of the most important examples of Tuscan Romanesque architecture. The district of Castagno d'Andrea is named after the great Florentine Renaissance painter Andrea del Castagno, who was born here.

Scarperia e San Piero
The Scarperia and San Piero municipality consists of charming medieval hamlets nestled in the Mugello countryside. There are many tourism, cultural, culinary and sporting activities that the visitor can discover. In San Piero a Sieve, two important traces of the Medici dynasty: the Trebbio Castle and the Bosco ai frati Convent, with the precious crucifix by Donatello. In Scarperia, one of the most beautiful hamlets in Italy, the 14th century Palazzo dei Vicari houses the museum that celebrates the 500-year-old tradition of knives and cutting tools manufacturing. Various locations host many fascinating museums: from the one with Leprino's moving figures, to the archaeological one, and the Gothic Line one. And Scarperia is also home to the very famous Mugello race track.

Vicchio
A village that is closely entwined with art and culture: it was the birthplace of Giotto and Beato Angelico, while Benvenuto Cellini and Giosuè Carducci chose it for their summer stays. Nestled in a delightful landscape and still open today are the small House of Giotto where the master of the great pictorial tradition was born and the bridge that tells of his meeting with Cimabue. But there is more: the district of Barbiana, from 1957 to 1964, was the setting for the innovative educational experience of Don Lorenzo Milani of whom you can visit the church, the classroom and the cemetery where he is buried. In the welcoming old town you will be surprised by the Montelleri lake where you can fish, picnic or indulge in a little relaxation.