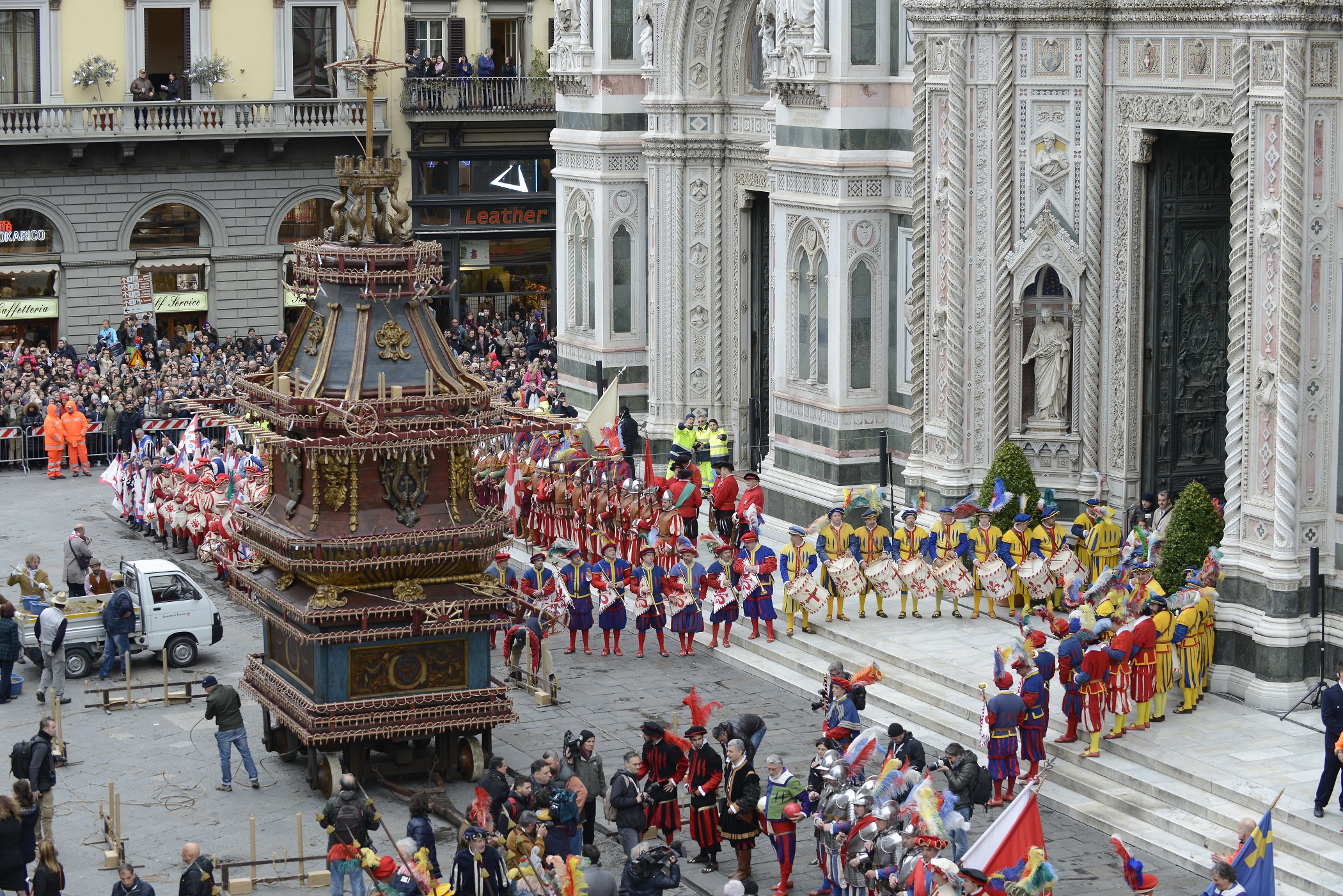 The "Bursting of the cart" has its origins in the first Crusade (1099), whose objective was taking away the Jerusalem Holy Sepulchre from the rule of infidels. According to local tradition, commander Godfrey IV de Buillon decided to reward the Florentine Pazzino de’ Pazzi for his courage (he was the first to climb the walls of the city), by giving him three chips of stone from the Holy Sepulchre. Once back home, he was welcome by the Florentines and the stones became object of worship: this reliquary was preserved for a long time in the Church of San Biagio (the former church, now hosting a library, located in Piazza di Parte Guelfa) and then, in 1745, transferred to the Church of SS. Apostoli, where is still stored today. On the evening of Saturday Easter Eve, the Sacred Fire is lit with these flints, every year on Santa Maria del Fiore churchyard… this is the prelude to the Explosion of the Cart. On Easter Sunday morning, a giant cart, the so called brindellone is pulled by a pair of oxen adorned with flowers through the streets of Florence, preceded by a historic parade of 150 people in 15th century costume (soldiers, musicians, flag-wavers) and finally stops in Piazza del Duomo, between the Baptistery and the Cathedral.

At 11 am, while the "Gloria" is being sung, the Archbishop lights up the Colombina (a rocket in the shape of a dove triggered by the holy fire) that starts flying from the altar down a wire outside the church, to reach the Cart in the square and set off the spectacular fireworks. The ancient cart disappears under the coloured lights, explosions and clouds of smoke… and reappears at the end of the fires, showing the amazing marbles of the Cathedral in the background. If the ritual goes smoothly and the Colombina goes back to the high altar good luck is ensured for the city and its citizens. We wonder if it is a legend or not, but we know for sure that the colombina failed its mission in 1966, when Florence was affected by the flood of the Arno River.

Organized for many centuries by the Pazzi family - with an interruption following the conspiracy (1478) planned by the Pazzi to kill Lorenzo and Giuliano de' Medici - the rite was originally very simple: the Florentines could light their torches from the Sacred Fire at the church. In the thirteenth century, instead, a richly decorated wagon was built to be pulled around the city and distribute the holy fire to all the citizens. Since 1515, Florentines inaugurated a tradition still alive today: from the cart, placed between the Baptistery and the Cathedral, would start the fireworks spreading symbolically the Divine Light and the Blessing over the entire city.

The name Brindellone, referred to the cart, has a very curious origin. This term comes from a different Florentine feast, called Festa della Zecca fiorentina (Florentine Mint) celebrated on June 24th (St John the Baptist Day), when a shabby man, wearing a camel skin - a cloth called by the Florentines "brandello" or "brindello", as the one worn by the Baptist - pulled a hay wagon. The Brindellone is over 12 meters high (3 floors), 40 tons weights and it is stored in a deposit located in Via il Prato, a short walk from Porta al Prato. Every year, on Easter morning, the doors open and the cart becomes the star of this ancient tradition.