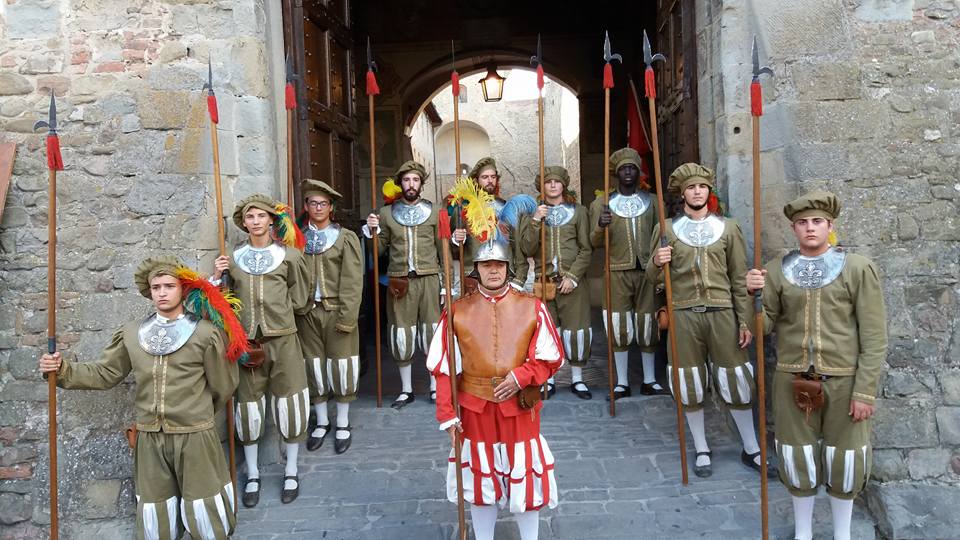 Popular traditions in the Mugello area

The Mugello is a territory deeply attached to its ancient traditions, closely tied to both the unchanging cycle of seasons and to the events and historical figures who have marked its history.

Among the historical re-enactments, particularly striking is Medioevo alla Corte degli Ubaldini in Palazzuolo sul Senio, which brings the hamlet back to the time of the dominion of the powerful feudal lords who sealed the fate of this place. The spectacular historical re-enactment, held in the month of July, after some evenings of shows and music, ends with a theatrical field battle and the Palio della Campana, inspired by the Florentine occupation of the area in 1373. Furthermore, during the Christmas holidays the village is the scene of the nativity scenes festival 100 presepi per Palazzuolo, with an award ceremony for the most creative composition.

Still medieval-themed, in the month of July, is the historical re-enactment of the Dante Ghibellino in San Godenzo, which was created in 1991 to remember the Convention of exiled Guelphs and Ghibellines in the San Godenzo Abbey on June 8 1302, attended by Dante Alighieri too, who was sentenced to exile. The aim of the convention was to reach an agreement among the noble families expelled from Florence to financially guarantee the Ubaldini, lords of the Mugello, in case they were attacked by Florence in their Castello di Montaccianico. The event, historically documented by a written account kept in the State Archive of Florence, is celebrated with conferences, shows and themed dinners in the lovely setting of the hamlet.

Featuring a medieval-fantasy atmosphere is the festival of witches in Marradi, which recalls the burning of the Lamone witch who haunted these places in ancient times; legend has it that she was the daughter of the Dark Rider, one of the mercenary soldiers of Count Lando's free company , defeated by the inhabitants of Marradi in the famous Scalelle Battle in 1358. On the night of August 18 the village goes into horror mode with music, food and costumed actors late into the night. Still in summertime, between the last week of July and the first one of August, Marradi hosts the Graticola d'oro, with parades of floats, water games, dance and singing competitions, which form the backdrop to the games among districts for the winning of the golden grill.

The Palio del Diotto in Scarperia, preceded by the Renaissance Days, takes place at the beginning of September since 1953. The celebration intends to remember the transfer of power between Albertaccio Corsini, outgoing Vicar, and Carlo Acciaioli, new Vicar, in September 1545. Scarperia, funded by Florence on September 7 1306, has always organised the festivities for the celebration in conjunction with the Nativity of the Madonna of the following day, the “Dì otto”. Costume parades precede the five competitions among the districts, clearly rural and artisanal in origin: the “knife throwing”, the “race of tubs”, the “tug of war”, the “race on bricks” and the “greasy pole”.

Other events are instead tied to popular religiousness and the agricultural vocation of the territory, where the sacred and profane come together: much cherished is the Mugello Carnival in Borgo San Lorenzo and the one in Dicomano which, on the evening of September 7, hosts the Rificolona, a parade for grown-ups and children with multi-coloured paper lanterns, that were used in the past by local peasants to illuminate their path towards Florence, where the next day they would sell their goods on Piazza Santissima Annunziata. Deeply felt is the religious celebration of the Patron Sant'Onofrio on June 12, to whom a wonderful neoclassical-style oratory is dedicated.
Still noteworthy in Borgo San Lorenzo is the spectacular Ride of the Magi (January 6), recalling the frescoes by Benozzo Gozzoli inside Palazzo Medici Riccardi, as well as the celebrations for the Patron Saint Lorenzo (August 10).

Held in September in Firenzuola is Un Tuffo nella Storia, a historical re-enactment dedicated to the famous Battle of Monte Altuzzo, which in September 1944 broke through the Gothic Line fortifications and allowed the 5th American army of General Clark to clear the path towards Bologna.

Lastly, on January 6 San Piero a Sieve sees the arrival of the Train of the Befana, bringing candy and sweet coal to all children.