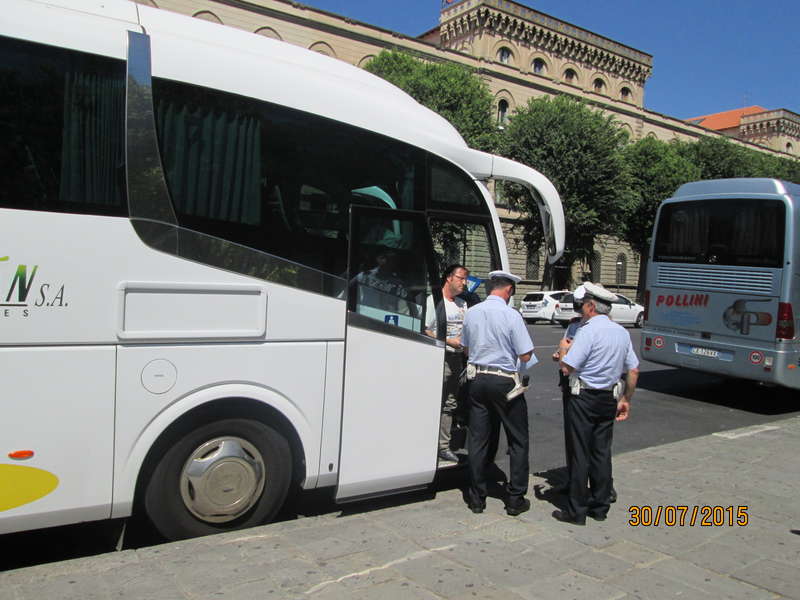 Tourist buses or coaches coming to Florence should consider the Limited Traffic Zone for buses.

A limited traffic zone for buses (Z.T.L. BUS), valid 24 hours a day, has been established in the whole territory of Florence and Galluzzo. Transit of buses is allowed, only along predetermined itineraries, after payment of a fee and subsequent emission of a pass (called CONTRASSEGNO) which may be requested and received only on-line (servizionline.serviziallastrada.it). The pass always has to be displayed on the bus in a visible position.

From 2020 checkpoints are closed and passes have to be purchased exclusively online, on the Website: servizionline.serviziallastrada.it. After subscription, including all details about the bus, you pay a rate which will vary depending on size/emissions of the vehicle, duration of the stay and other parameters.

Depending on the type of pass, you can use some of the climb/descent points for passengers: Lungarno Pecori Giraldi, Viale Ariosto/side of the city walls, piazza Vittorio Veneto (allowed stop: 10'), Piazzale Michelangelo (allowed stop: 20'). The point in Via Della Dogana (San Marco area, Academy Gallery) has been suspended since October 2022. As a replacement, a new descent-only point has been activated in piazza Savonarola.

The climb/descent point for passengers coming from/going to the Central Railway Station SantaMariaNovella is in Largo Vincenzo Giudice (the interior lane of Viale Strozzi), between the underpass and via Valfonda. In order to use this climb/descent point, the bus must be authorized by Servizi alla Strada.

The fare of the pass changes according to a series of factors (typology of bus, location of the hotel, length of the stay etc.).