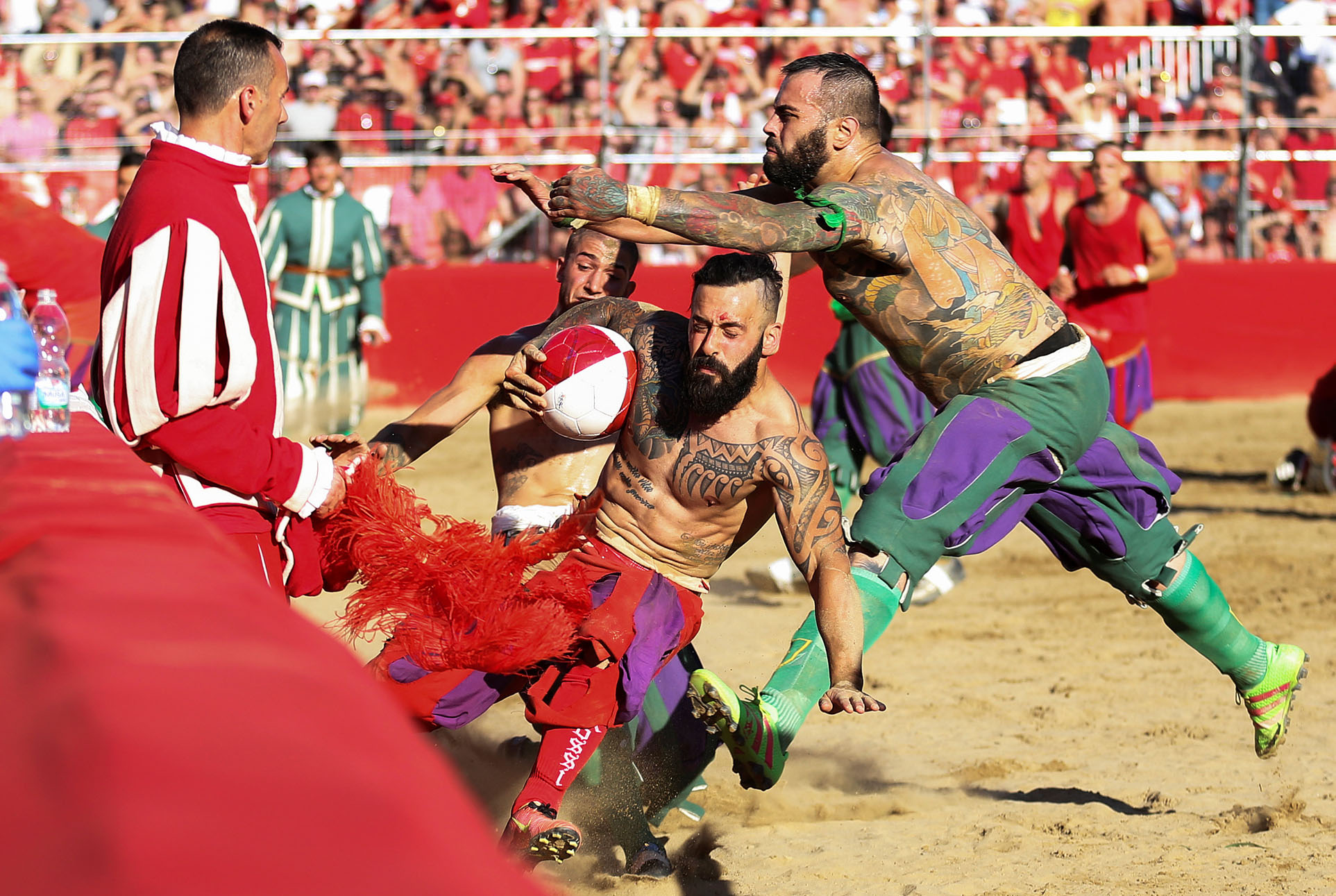 The Calcio Storico (historic football) has very ancient origins and is known as well as Calcio in costume (football played in costume) due to the 16th century costumes the players still wear for the game. According to the legend, the Calcio Storico comes from the first ball games of antiquity ("Sferomachia" played by the Greeks and "Harpastum" by the Romans); although popular in late medieval Florence, the first official news about Calcio Storico date back to the end of the 15th century. The competition takes place on a field of sand set in Piazza Santa Croce, a historic location used for years that, in the month of June, turns into an ancient football ground. Each side fields 27 players in a game and fight for the control of the leather ball, with one goal, called caccia: to bring the ball into the big net at the end of the field and therefore win the game. The winner is the team who scores more cacce. This sport is considered the father of modern football, but it is actually closer to rugby, even if more violent: players fight no holds barred. There are obviously rules in this game, but it is not easy to enforce them.

The teams are four, one for each quartiere (district) of the city corresponding to the four basilicas of the city: Santo Spirito (Whites), Santa Maria Novella (Reds), San Giovanni (Greens), Santa Croce (Blues).

After playing each other in two opening games during the month of June, the two overall winners play the final match on June 24th, on St. John the Baptist Day, the patron saint of Florence. The extraction of the matches occurs on Easter Day, during the Explosion of the Cart. A sumptuous parade in historical costume announces every match: it starts from Piazza Santa Maria Novella and heads through the centre to end in Piazza Santa Croce.

The day of the final match, St John’s Celebrations end at 10 pm with spectacular fireworks, i Fochi, launched from Piazzale Michelangelo!

In 1530, on February 17th - under the siege of Emperor Charles V – the Florentines, although exhausted by the siege, decided to play a match in Piazza Santa Croce, to mock the enemy.

The anniversary of this glorious game has been celebrated until 1739, when the last documented match was played, then, after 2 centuries, this tradition was restored in 1930, on the 400th anniversary of the Partita dell’assedio (Match of the siege). Since then, the Calcio Storico has always been played in Piazza Santa Croce, every year, with very few exceptions.

The Calcio Storico is finally back again for its fans after the pandemic! Semifinals will take place on June 10 (Azzurri vs Bianchi) and 11 (Rossi vs Verdi). All details about presales soon available!