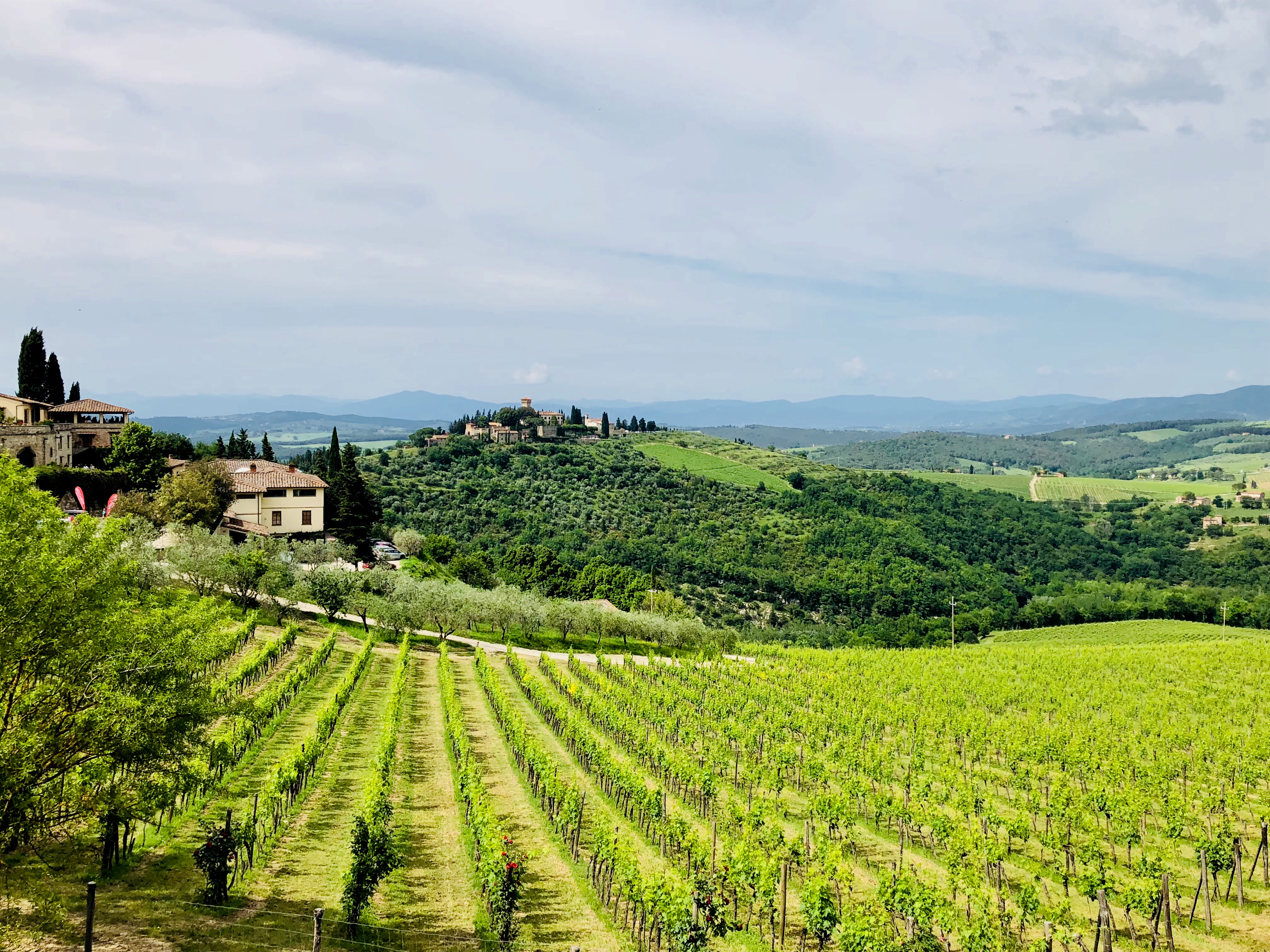 All around Florence - the Chianti area

Well-known all over the world for the production of its excellent wine, the Chianti territory consists of a hilly area located in the middle of Tuscany, between Florence and Siena.
Vineyards and olive groves alternating with farmhouses, turrited castles and fortresses, ancient hamlets: this is the typical Chianti landscape, possibly the most famous in Tuscany, rich in art treasures waiting to be discovered.
The Chianti borders, emerged over the centuries, are by now inextricably linked with its Chianti Classico wine that is produced in the many vineyards of Greve in Chianti, Barberino Tavarnelle and San Casciano Val di Pesa, the three municipalities of the Florentine Chianti, and of Radda in Chianti, Castellina in Chianti, Castelnuovo Berardenga, municipalities of the Sienese Chianti.

Barberino Tavarnelle
It is a municipality made up of two main hamlets: Barberino Val D’elsa and Tavarnelle Val di Pesa, combined into one municipality in 2019. Divided by a road that is not even two kilometres long, the two hamlets are located in the Chianti Classico area, in that wondrous territory of the Val d’Elsa and Val di Pesa which features a green nature of vineyards and olive trees.
In the hamlet of Barberino, a typical medieval fortified settlement with an elliptical plan located on a hill along the via Cassia road, stand the 15th century Palazzo Pretorio, the Spedale dei Pellegrini built in 1365, and the Pieve di Sant’Appiano, among the oldest Romanesque churches in the area.
Worth mentioning in the village of Tavarnelle, in the middle of the Val di Pesa, is the 13th century Chiesa di Santa Lucia al Borghetto. The fortified hamlet of San Donato in Poggio is full of charm, with almost intact castle walls and the late-Renaissance Palazzo Malaspina within.

San Casciano Val di Pesa
Surrounded by greenery, atop a hill of olive trees and vineyards, between the Pesa and Greve valleys, rises San Casciano in Val di Pesa which preserves valuable medieval and Renaissance vestiges.
It is the first municipality of the Chianti area that you find coming from the north, combining beautiful scenery with incredible architectural glimpses; with four parish churches, all in the Romanesque style, such as the San Giovanni in Sugana parish church and the Santo Stefano a Campoli parish church, five castles as well, numerous historic villas and the Giuliano Ghelli Museum of sacred art, it is hard not to be bewitched by the evocative atmosphere recalling ancient times, between artistic harmonies and breathtaking views.

Greve in Chianti
A village located in a basin on the banks of the Greve river, it was born on the sidelines of the important communication network of the so-called via Volterrana and via Francigena roads. Peculiar for its asymmetrical shape and the terraced porticoes is the central piazza Matteotti square, which hosts every year, in the first half of September, the Expo del Chianti Classico market fair, an unmissable event for tourists and lovers of the Gallo Nero wine. Important remains are the ones of the ancient castles of Panzano and Montefioralle, the latter the birthplace of the family of the famous explorer Vespucci. Rising in the Greve territory is the Verrazzano Castle where another famous Italian seafarer was born in 1485, Giovanni da Verrazzano, who explored the Atlantic coast of the United States and discovered the New York bay.

Castellina in Chianti
Following the road which leads to Castellina in Chianti is a spectacular experience in which wheat, vineyards and cypresses follow one another between evocative bends and countryside scents. Once you reach the hamlet, hidden among verdant hills, the Chianti area releases its typical landscape while you walk through the cobbled streets of the old town. Walking in the hamlet means retracing the ancient history of the village, discovering Etruscan remains and noble palaces of Sienese and Florentine families, tasting the art of butchery of the Chianti area, with its charcuterie production, and the round taste of the Chianti Classico wine. The old town is surmounted by the ancient fortress which houses the Chianti Archaeological Museum.

Castelnuovo Berardenga
Overlooking Siena in the distance, Castelnuovo Berardenga is the ideal city to go and discover the most classic Tuscan landscapes, the most renowned Chianti wines, ancient art, richly decorated gardens that are scattered throughout the territory among museums and villas. A romantic and peaceful walk which starts from the centre of Castelnuovo and continues just a few kilometres away, among vineyards and olive trees; known as a Città Slow, that is “city of good living”, its identity is based on well-being and inspired by the quality of life, its produce and the excellence that this area has to offer.

Radda in Chianti
Located between the Pesa and Arbia valleys, the town has a typical medieval aspect, perched on the hillock with the bell tower dominating the valley, the alleys and the old small squares.
The earliest records of Radda date back to 1002; during the 11th and 12th century the Radda castle gained prominence until it became a "curia", that is the seat of a civil district, then became the capital of the Chianti League in the early 14th century and remained so until the Lorena's reform in 1774.
Walking among the streets and the historic buldings of the hamlet you can feel an evocative atmosphere concentrating around the ancient walls where the view opens on the wonderful Chianti landscape.

Find out more on the official website of the Ambito Turistico Chianti. 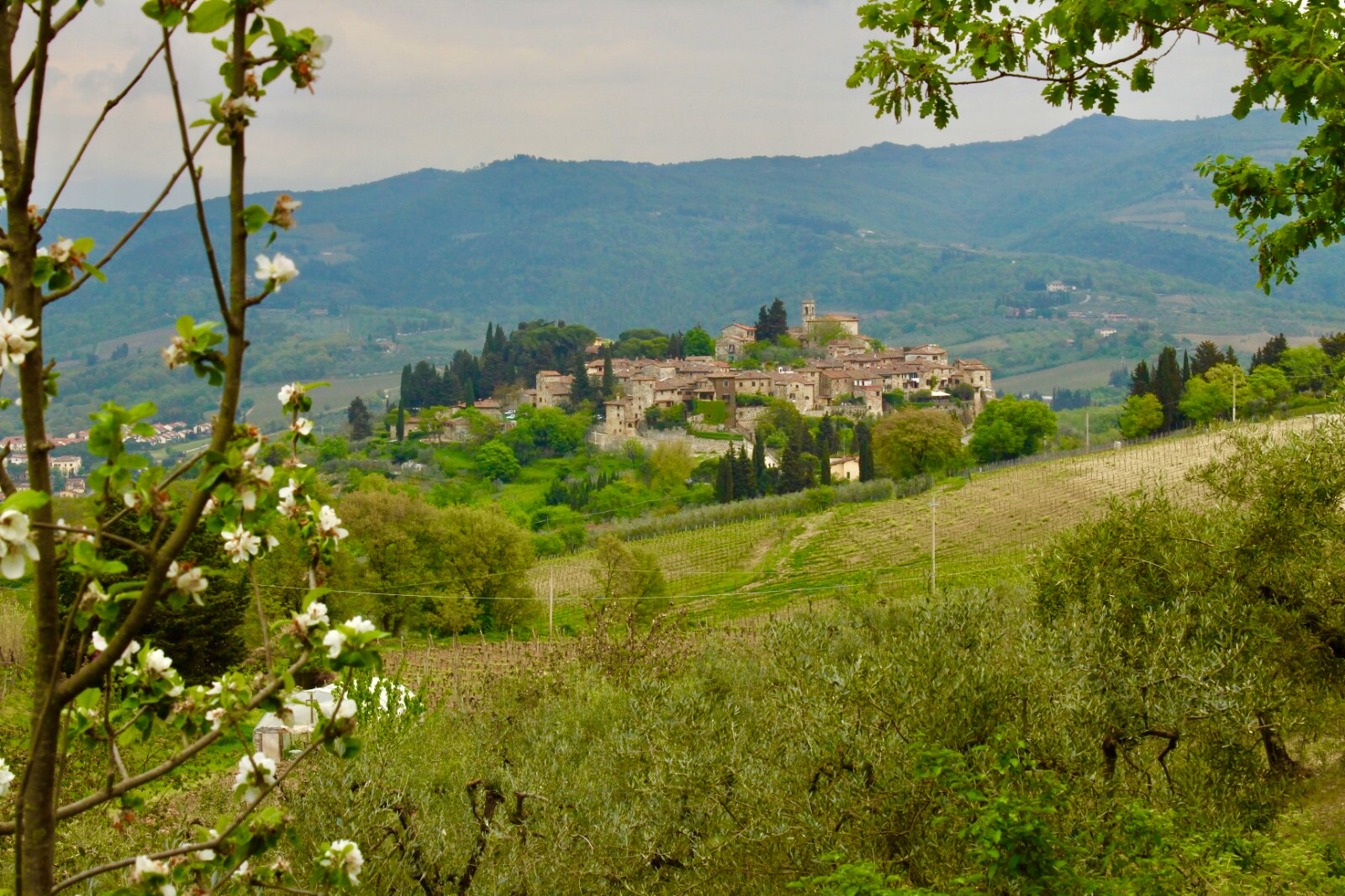 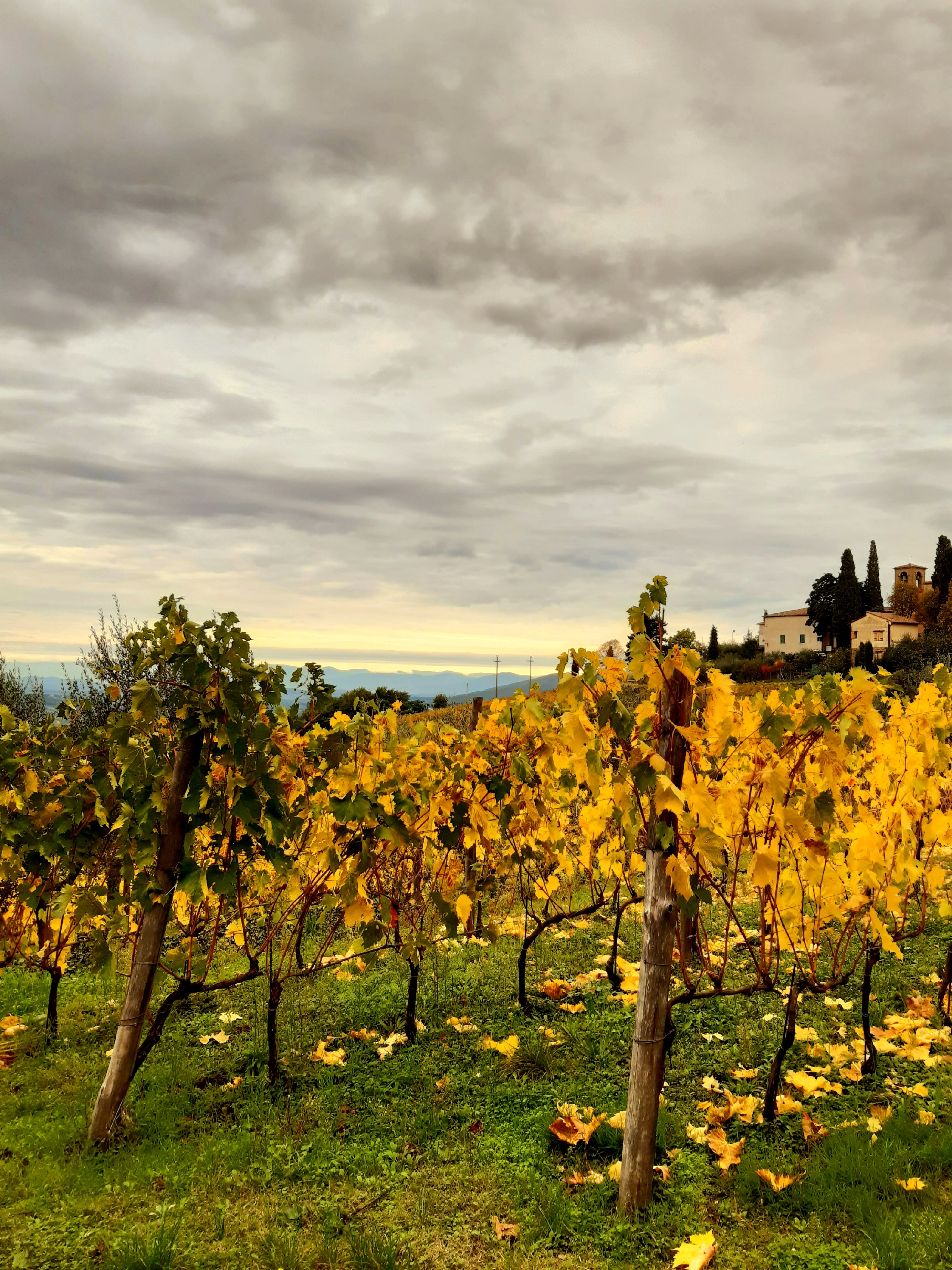 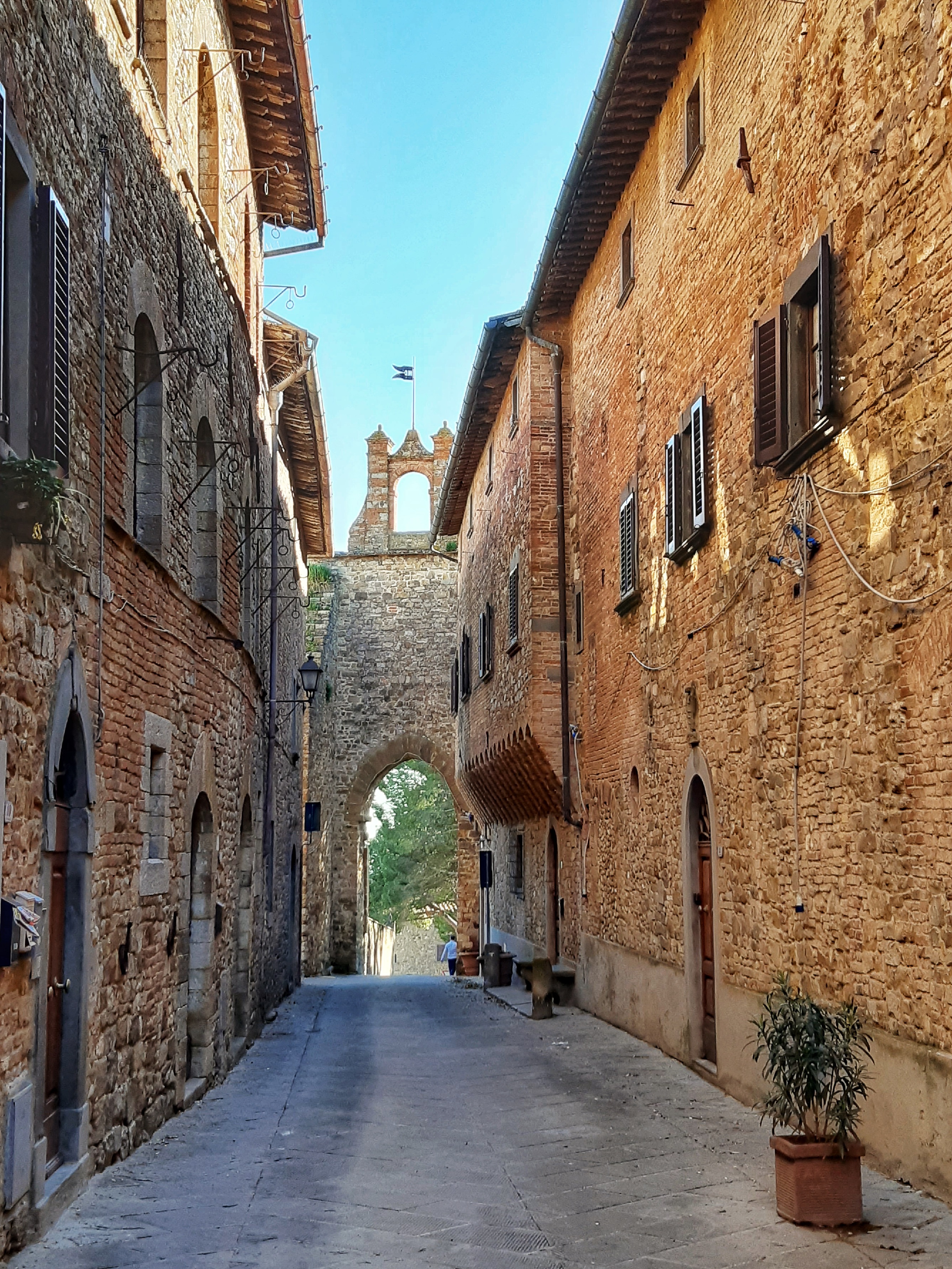