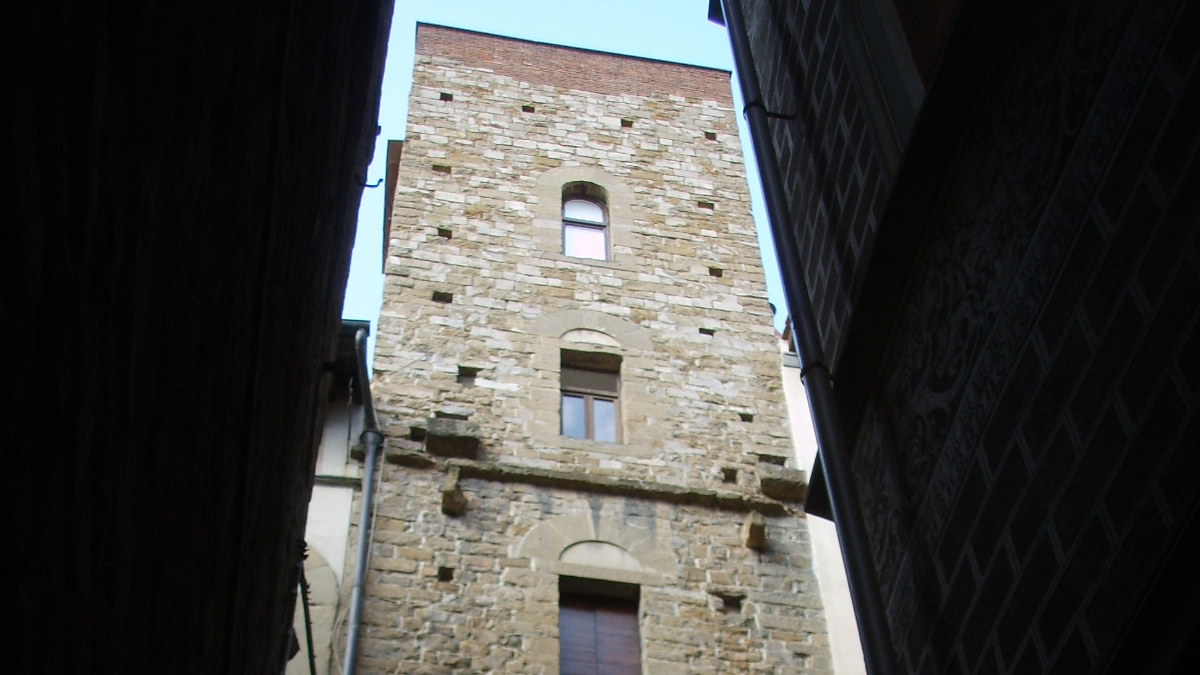 In the Middle Ages, Florence was well known as “the towered city”, because of the large number of tower houses which defined its skyline: in the 13th century, they were about 160, up to 213 ft-high!

Most of them do not exist anymore, but it is still possible to bump into some of these amazing architectures while walking in the historical centre of the city and be suddenly taken back in medieval Florence.

Built during the 12th century, mainly for military use, by the aristocrats, and then by rich middle class citizens, the tower houses had a strategical role in a period of disputes and struggles between factions, but they also represented a symbol of prestige among the richest powerful families: the highest the tower, the greatest the power of the owners and their control of the city.

In the 13th century, there was a proliferation of tower houses: during those years, the rival factions of the famous Guelphs and Ghibellines, led by the families of Buondelmonti and Amidei, were facing each other; later, other strong rivalries came out between the families of Cerchi and Donati, belonging respectively to white Guelphs and black Guelphs.

Usually, the owners had their home right next to the tower, connected to it through an internal passage. Many families and factions, bound together by common interests, and neighbours, could shut themselves into one or more towers, connected through mobile platforms, and create an efficient network, both defensive and offensive (the so-called “Società delle torri”).

The most typical towers were structured as following: in the underground the storage, where it existed, one room per floor, the kitchen in the top floor (to reduce the risk of fires and avoid pervasive smell of food in the other rooms). The top of the tower was designed with battlements and supported by brackets, in order to be used as a look out post. Only the richest families owned a well inside the tower house and a “loggia”(gallery) on the ground floor. Traces of common decorations can still be seen today: bronze ring to tie horses, hanging brackets for lanterns, the so-called “buche pontaie” (symmetric holes used to house wooden scaffoldings).

When a faction prevailed over the rival one, the towers of the defeated families were usually destroyed / beheaded, or they were taken by the winners. In 1250, a new local law was imposed: the towers should not be higher than 50 “braccia” (around 100 ft) and this is the reason why many of them were lowered.

During the 14th century, many tower houses, symbol of a past left behind, fell into neglect; some of them were demolished (representing a danger for passers-by), other ones were refurbished and they are still here nowadays! Unfortunately, some tower houses, especially the ones near the bridges, were badly damaged by bombings in 1944, and later partially rebuilt.

Now, the city has about 50 tower houses. The itinerary described below shows a selection of the most representative ones, still intact or just slightly transformed, mainly located in some areas of the city: along via de’ Cerchi and surroundings (via Condotta, via de’ Tavolini, via del Corso), in the nearby of Por Santa Maria (via delle Terme e borgo Santissimi Apostoli), borgo San Jacopo (Oltrarno).