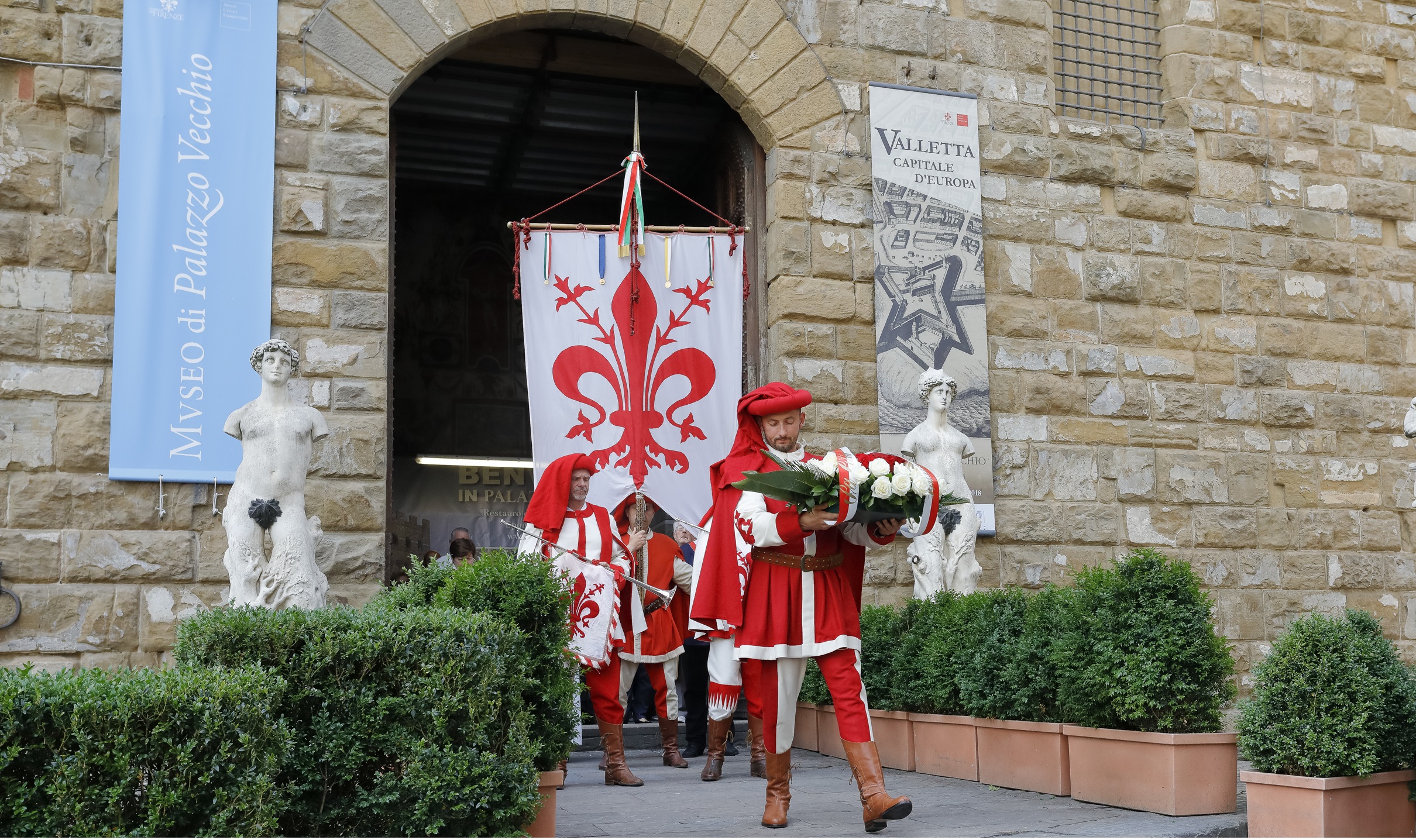 Every year, on May 23rd, a celebration in memory of Fra' Girolamo Savonarola is held in Piazza Signoria.
On the same day in 1498, the famous Dominican friar was hanged and burned, along with two other monks, in Piazza Signoria, in the exact place marked by the circular tombstone, right in front of the Neptune’s statue. To condemn definitely his memory, his ashes were thrown from Ponte Vecchio into the Arno River.
The day after that terrible execution, some pitiful people left flowers and rose petals on the exact point of the martyrdom. Since then, the local authorities repeat this same gesture in a more official ceremony occurring every year. In the morning of May 23rd, the Historical Parade of the Republic of Florence leaves from Piazza di Parte Guelfa and heads for Piazza Signoria where flowers have been deposited (Infiorata); then, the procession continues to Ponte Vecchio from where petals are thrown into the Arno, in memory of that dramatic event.

Let’s discover who was Girolamo Savonarola and what he had done to "deserve" such a terrible condemnation. Savonarola was a Dominican friar from Ferrara, already popular all over Italy when he was invited to Florence by Lorenzo il Magnifico de' Medici, to direct the Convent of San Marco (the same place housing the masterpieces by Beato Angelico).

His popular sermons became more and more critical with regard to the decadence and the corruption of the Church (especially the Papacy) and, more generally of the contemporary era. The Friar criticized the classicist paganism, the opulence of the Courts, the loss of the original values of Christianity. Famous was the "bonfire of the vanities" in 1497, when, in Florence, jewels, luxurious clothes and pagan works of art - Savonarola’s sermons had a strong influence on many artists, such as Sandro Botticelli - were burned.

The criticism was soon directed towards the Medicis as well, considered jointly responsible for this decadence, as well as tyrants of Florence. After the death of Lorenzo il Magnifico (1492) followed by the weak government of his son Piero, the Medicis were chased and Florence became a Republic, which would last from 1494 to 1512. The city was divided into two factions: the Piagnoni (the lower/middle class, on the Friar's side) and the Palleschi (on the side of the Medicis, whose coat of arms was composed of a series of balls, in Italian “palle”).
Particularly complicated was the Italian political chessboard of that period - whose balance had broken especially after the death of Lorenzo - with extremely changeable alliances between Italian and foreign courts (Charles VIII of France, Ludovico Sforza, Pope Alexander VI and his son Cesare Borgia were among the main actors). In this historical context, Fra' Girolamo Savonarola, the victim of a conspiracy, was excommunicated by the Pope for heresy in 1497. A few days later, at night, the Palleschi faction stormed the convent of San Marco and kidnapped Fra Girolamo and two other monks, imprisoning them in the Alberghetto (a cell at the top of the Tower of Palazzo Vecchio). After a series of tortures and a summary judgement, the three friars met their terrible fate.