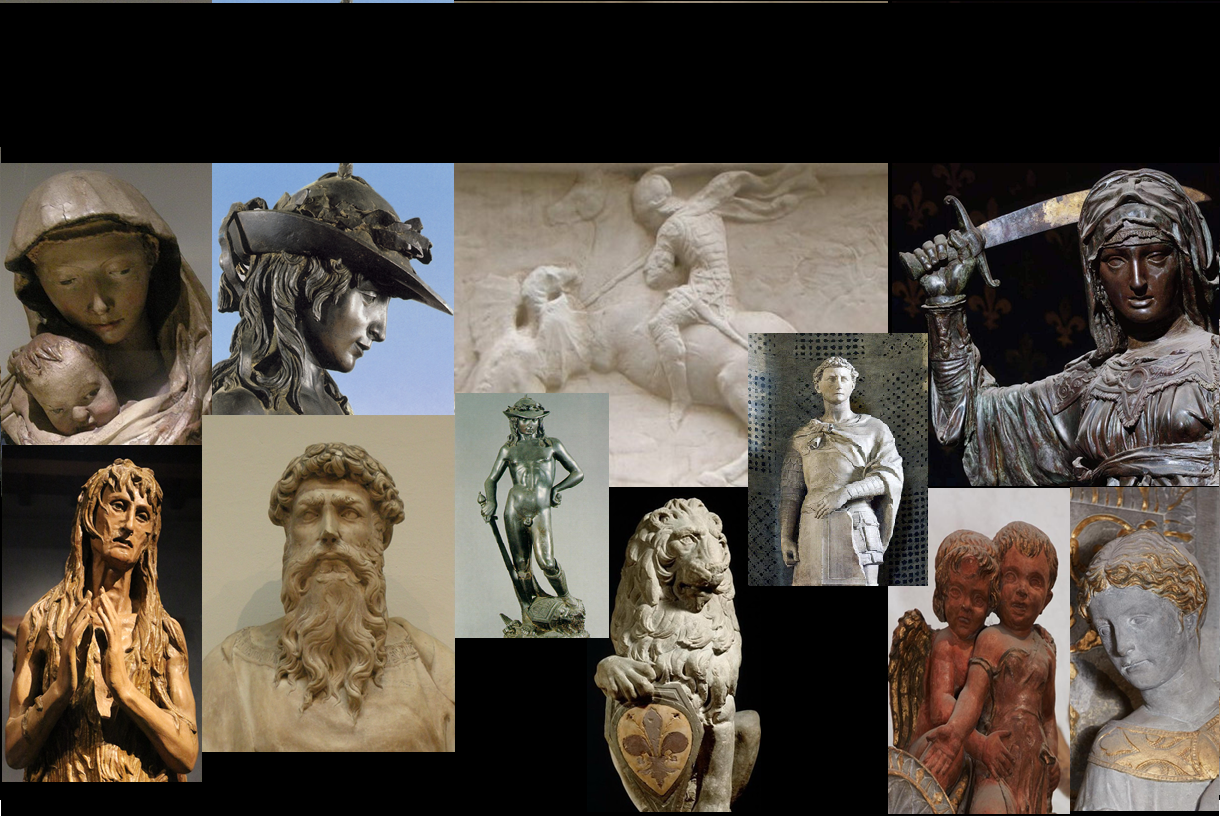 Donatello can be considered one of the greatest sculptors of all time. He was a master of all sculptural techniques (he worked with marble, terracotta, bronze, wood, and stucco), an inventor of new realistic prototypes, as well as a reviewer of ancient art. He could instill life in his creations and humanity in his subjects. In the first half of the 15th century, the Florentine sculptor, together with Masaccio (who excelled in painting) and his friend Filippo Brunelleschi (who immortalized himself thanks to his monumental architectural skills), became one of the protagonists of the Italian Renaissance in Florence. They wrote a new fundamental page in the history of the art of the western world. Michelangelo, whose master Bertoldo used to be Donatello’s pupil, was among his most fervent admirers.

Although Donatello’s works can be found in many Italian cities (Padova, Siena, Prato), undoubtedly the biggest part of his creations can be admired in Florence, where he was born and then died (1386-1466), and where he lived most of his life.

Here’s an itinerary to discover his Florentine artistic legacy.

Young Donatello started his career in the years between the end of the 14th century (late-gothic) and the beginning of the 15th (Proto-Renaissance). After studying ancient art in Rome for two years with Brunelleschi, the sculptor started an intense activity on the construction site of Duomo.

In Museo dell’Opera del Duomo, the first step of our ideal tour, we can admire: John the Apostle, the first revolutionary artwork by Donatello, realized for the ancient façade. The numerous sculptures he made for the belltower, like the Prophets, adhering to the classical statuary; a mature work, the cantoria. This was decorated with a joyful parade of dancing putti, and the Penitent Magdalen, an unbelievably modern wooden sculpture, dating to 1457 when the artist was already in his seventies.

Even his marble statue of David was sculpted for the Duomo. It's currently located, like many more of Donatello’s artworks at Museo del Bargello. The beautiful Saint George, together with the bas-relief at its feet, depicting the saint slaying the dragon, was realized for one of Orsanmichele church’s tabernacles (replaced by a copy). This was Saint George, a prototype of the Renaissance hero, standing tall and proud. This can be considered a precursor of Michelangelo’s David. A true masterpiece that can also be admired in Museo del Bargello is Donatello’s bronze David, the first freestanding nude bronze statue made since antiquity. This was also the first artwork commissioned by the Medici family. The biblical hero is represented at a very young age, nude, wielding a sword and a rock, standing victorious with his foot on Goliath’s head. In the same room of the museum, stands the Marzocco, the lion supporting a shield with the lily of Florence depicted on the front, considered a symbol of the city. It was initially intended as a decoration for the papal apartments in Santa Maria Novella, but it later took its regal place in front of Palazzo Vecchio (replaced by a copy).

At Museo Stefano Bardini, where the famous antiquarian exhibited his many treasures between the 19th and 20th centuries, there are two representations of the Virgin Mary with Child made by Donatello. One is the polychromatic “Madonna dei cordai”, named after the Guild of Cordai, the rope makers, who commissioned it. The other, the “Madonna della Mela” is made of terracotta and represents the Virgin offering an apple to baby Jesus, in a symbolic and maternal gesture.

Inside Santa Croce church we find two artworks by Donatello: in the right nave, framed by a classic-style aedicula, there's a representation of the Annunciazione, realized in pietra serena, that shows the Virgin looking at the kneeling Angel with an expression of surprise and reverence of rare beauty. The other masterpiece by Donatello is a wooden Crucifix, located in the left transept, that, for its extreme realism, as defined by Brunelleschi “Cristo contadino” (farmer). The museum itinerary continues in the “cenacolo”, the refectory of the convent, where we can also admire a statue in gilded bronze representing San Ludovico of Tolosa, whose original destination was one of Orsanmichele’s tabernacles.

In the Sala dei Gigli (Hall of Lilies) of Palazzo Vecchio, we can admire one of the last artworks made by Donatello, the bronze sculpture depicting Judith and Holofernes. The biblical heroin is frozen in the act of raising her sword, just a moment before the beheading of Holofernes, conferring an intense dramatic force to this masterpiece. It was originally located in Palazzo Medici via Larga (Palazzo Medici Riccardi) but was later confiscated and moved to Palazzo Vecchio at the time of the Florentine Republic (1495).

Another important church, San Lorenzo, holds many treasures made by Donatello: the Sagrestia Vecchia, conceived by Brunelleschi as the first mausoleum of the Medici family. The ceiling is decorated by eight polychromatic bas-relief stuccos depicting the four evangelists and four scenes of John the Apostle’s life. The sculptor created them on the occasion of the famous Ecumenical Council of 1439. For the church, Donatello also created the two bronze doors (of the Apostles and the Martyrs) and the two pulpits, situated between the central and the side naves. The artist, aided by his collaborators, decorated with scenes of the Ascension and the Resurrection, in the last years of his life.

Further proof of Donatello’s fame is represented by the location of his burial place: the crypt of San Lorenzo Church, just a few steps far from Cosimo the Elder’s tomb.

“Either the spirit of Donato works in Buonarroto (Michelangelo), or that of Buonarotto began by working in Donato.” That’s what Giorgio Vasari wrote in his book, “Lives of the Artists”, at the end of the chapter he dedicated to Donato de’ Bardi, called Donatello.