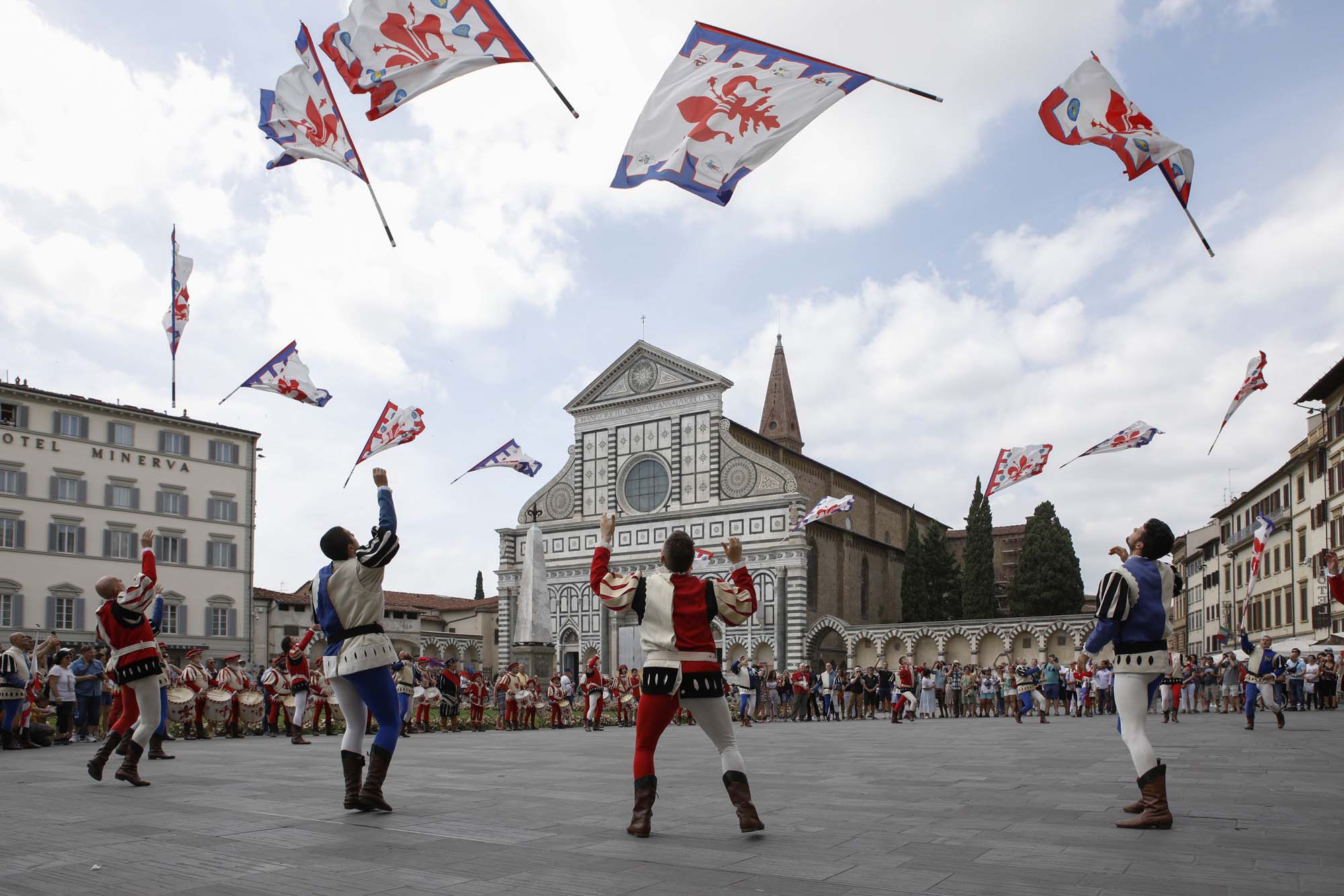 Folk traditions and historical re-enactments represent the heritage and the memory of a community. As we celebrate these anniversaries - between sacred and profane - or commemorate important events for our city or territory, we learn and preserve our identity.

Calcio fiorentino, Scoppio del Carro, Festa della Rificolona. These are just a few of our folk traditions whose origins are lost in the mists of time, and which attract thousands of locals and tourists every year. They are a legacy of the city's ancient past, often with religious origins that coalesced with rural culture around specific historical events. Taking part in these events means understanding more about the city, its history, and its identity.

Calcio fiorentino (Florentine football) is an old and very "tough" sport which sees four teams corresponding to the city's four traditional districts face off against each other in a tournament whose final is played on June 24th, the Feast Day of St John the Baptist (the city's patron saint). Each match is preceded by a dramatic parade depicting the history of the Florentine Republic. The festivities for the city's patron saint culminate in a dazzling fireworks display that lights up the sky - the traditional Fochi.

The Scoppio del Carro (Explosion of the Cart) dates back to the First Crusade, when flints from the Church of the Holy Sepulchre in Jerusalem were brought back to Florence. Today, the stones are still used to light the holy fire. On Easter morning, to cap off a series of historical processions, the cart is placed between the Duomo and the Baptistery. During Mass, a mechanical "dove" flies along the central aisle of the Duomo towards the cart, eventually lighting the colourful fireworks. If the display goes well, this is considered a good omen for the city.

On the evening of September 7th, children and adults alike give the city a happy glow with their Rificolone, which are colourful paper lanterns. Processions from all over the city congregate in Piazza Santissima Annunziata, where it all began: on the Nativity of Mary, a fair was held (the Fierucola) and farmers, merchants and pilgrims came from far and wide with their traditional lanterns.

If these three are the most popular Florentine traditions, many others animate the city throughout the year: the scenic Cavalcata dei Magi (The Procession of the Three Kings, on January 6th), the celebrations for the Elettrice Palatina (the Electress of the Palatinate on February 18th), the Capodanno Fiorentino (the Florentine New Year Day celebrated on March 25th, the date of the Annunciation). Not to miss are the Trofeo Marzocco, competition between flag-wavers from all over Italy in Piazza Signoria (on May 1st) and the Fiorita in Piazza Signoria, in memory of the martyrdom of Fra' Girolamo Savonarola and his Dominican brothers (on May 23rd). We also celebrate three saints: Sant’Anna (on July 26th, in memory of the liberation from the tyranny of the Duke of Athens in 1343), San Lorenzo, co-patron of Florence (on August 10th) and San Zanobi, an important bishop of Florence at the beginning of the 5th century: on May 25th, we commemorate the miracle of the tree bloomed during the transfer of his coffin in the ancient Cathedral of Santa Reparata (an ancient column near the Baptistery reminds us of this event). Finally, on November 30th, the Festa della Toscana is going on in Florence, and throughout the region, in memory of the abolition of the capital punishment (1786) by Pietro Leopoldo, Grand Duke of Tuscany.